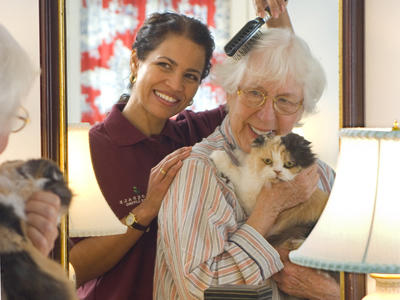 The Reality of Alzheimer’s in America

September is World Alzheimer’s Month, an international campaign to raise awareness and challenge stigma. Alzheimer’s disease has become so prevalent in the country, and the cases of Americans living dealing with the disease will only grow rapidly in the next years. By tomorrow or next week, it could hit any of our loved ones or ourselves, and we need to prepare for what it brings now.

The Individual with Alzheimer’s

According to the Alzheimer’s Association, more than five million Americans are living with the disease. The numbers are quite high, and chances are you know of at least one person dealing with it at the moment. Alzheimers Reality: Financial and Family Dynamics
The organization further illustrates the severity of the situation by sharing that a person in the United States develops the disease every 66 seconds, and that one in three seniors dies with Alzheimer’s disease or some other form of dementia. It is even ranked as the sixth leading cause of death in the United States. Reality of Alzheimers: Financial and Family Dynamics
In addition to this, Alzheimer’s is an expensive disease to have in America. The costs of care could significantly dwindle down a person’s assets. On average, the price tags on care include $6,844 per month for a semi-private room in a nursing home and $7,698 per month for a private room. A person would have to shell out $3,628 per month for basic services in an assisted living facility, $3,861 a month for a home health aide, and $1,473 a month for adult day services.

Family Dynamics after the Diagnosis

However, the diagnosis does not solely affect the individual. Alzheimer’s changes the dynamics in every family, and it takes a massive toll on family members and loved ones. Parents now find themselves leaning on their children for support and assistance; spouses become dependent on their partners for so much more than they ever expected, and children revert to their now aging parents for care. Often, family members are in the situation where they need to sacrifice aspects of their lives to provide the care that their loved ones require. Some leave their chosen careers, put starting a family on hold, and give up social activities to assume the role of primary caregivers to their loved ones. Alzheimers Reality: Financial and Family Dynamics
Family caregivers give up so much more than their time to meet the demands of caregiving. In 2015, more than 15 million caregivers attributed 18.1 billion hours of unpaid care. On average, family caregivers are put behind $5,000 a year for caring for a loved one with Alzheimer’s. While the amount might not seem like much for some families, it could mean going hungry for many struggling to keep up with the costs. Alzheimers Reality: Financial and Family Dynamics
For many individuals, the cost of caring for a person with Alzheimer’s could translate to inevitable bankruptcy. A recent article in News Times features a woman from Connecticut caring for her 80-year-old husband dealing with the disease. While Medicare covers a portion of his medical expenses, they have decided to forgo medications and frequent doctor’s visits for alternative methods. However, she knows that the expenses are heading in a direction that their nest egg will not be able to keep up with.
Their story is just one example of how pressing an issue this disease is in the country. So many Americans are facing the same struggles brought about by Alzheimer’s and the expenses that come with it. Alzheimers Reality: Financial and Family Dynamics

Its Effect on the Nation

The projected care costs this year for Alzheimer’s and other forms of dementia is at $236 billion—a figure that Medicare is expected to fund about half of. If you take into consideration the number of baby boomers turning 65, the number of individuals with Alzheimer’s is expected to grow in the coming years. Plenty of these individuals will have to depend on government programs to assist them in paying for the care that they need. But with the growing demand, Medicare may find itself on the verge of bankruptcy. Additionally, costs will likely increase even more.

How to Avoid the Difficulties

The importance of planning cannot be stressed enough. While it may sound overused to the point that it no longer holds much weight, individuals and families will benefit immensely from early planning.
Not many people realize how necessary having a comprehensive plan truly is until after the disease becomes their new reality. We read the accounts, and we see it happening every day, each person is just one diagnosis away from a completely different life.
Speak with a professional about it, and weigh each of the options presented to you. There is an abundance of long term care information online that you have access to, so learn as much as you can, as well. What matters is that you begin planning as early as you can and as best as you can.