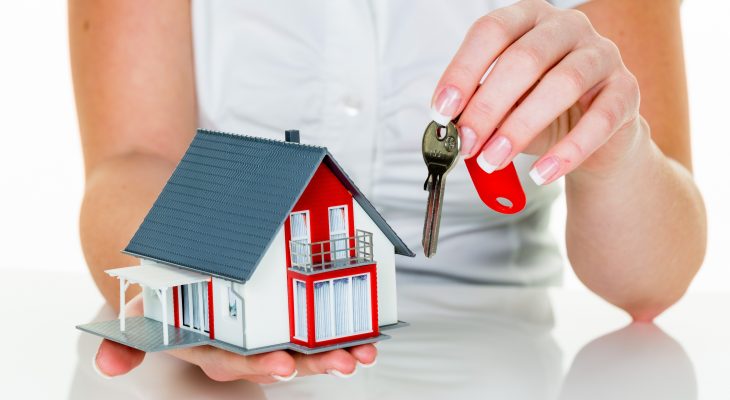 The U.S. is slowly becoming an aging country, according to U.S. Census data – more than 22% of today’s population is aged 60 or over. The RENTCafé study shows that the oldest cities in the country are mostly popular retirement spots in Florida, California, or Arizona, and have a median age of over 39.6. When it comes to renting, Austin, TX has the largest share of aging renters over 60 (12%), followed by Phoenix, AZ (17%), which also experienced the highest increase of 60+ renters, of 112%.

As expected, the median age among renter households is younger (42) than that of householders (56), but that gap is slowly closing as the older population becomes less enthusiastic about homeownership. Between 2007 and 2017, renter households aged 60 and over witnessed a 43% increase, reaching 9.37M nationwide. At the opposite side of the chart are younger age groups like renters 35 and under, which saw the weakest increase in a decade (7%), reaching 14.898M. By 2035, the 60+ demographic could grow to an estimated 18.6M, which is bound to have an impact on the future state of the U.S. real estate market.

Today’s demographics look substantially different than they did only a decade ago due to America’s older population growing significantly and at a very fast pace. According to Census data, the U.S. is a rapidly aging country, with more than 22% of the current population being aged 60 & over.

The overall aging of the population is not just the result of the economic hardship following the 2007 Great Recession, reflected in declining birth rates, but also the result of the Baby Boom cohort, America’s largest living adult generation, passing age 53 in 2017.

Taking into consideration the decline in births, as well as the higher life expectancy, this trend will likely continue uninterrupted. But which parts of the country have contributed more to this rapid graying of America?

The oldest cities by median age in the U.S. are popular retirement spots

Our top 30 oldest cities all have a median age over 39.6 and are mostly retirement cities in Florida, California, or Arizona. In fact, Florida is home to 12 of the oldest cities, with Cape Coral, first in our top, boasting a median age of 47.9, followed by Hialeah, with 46.5. Sunny Scottsdale, AZ is third in our top, with a median age of 46, proving once more its high popularity among retirees in search of warm days and entertainment.

The population’s median age increase is also reflected in the median household age that saw a steady increase over the 10-year period, reaching 52 in 2017.

Stemming from a decline in homeownership, older renter households increased faster than older owner households – 43% versus 31%. The rapid growth of the 60+ population is also visible across owner households as the only increase in the 10-year period between 2007 and 2017 was witnessed by seniors over 60. Those aged 34 and under saw a 19% decrease and owner households between 35 and 59 decreased by 12%.

Past studies we conducted show that the older population is no longer enthusiastic about homeownership, with many seniors starting to downsize and move into rentals. As their children move out, they find themselves alone, in a big house that costs a lot to maintain, causing them to rethink their housing choices.

Out of the 30 most populous cities in the U.S., 16 experienced an increase of over 40% in the 60+ renter household share between 2007 and 2017. Austin, TX takes the first place as the city with the highest percentage change in the share of 60+ renter households, increasing by 113% in the 10-year period. Phoenix, AZ is also present in this top with the second highest increase of 112% and it’s followed by another Texas city: Fort Worth, with 95%.

By 2035, the 60+ renter share is projected to keep growing while that of all other age groups will decrease

According to our projection based on the trend witnessed between 2007 and 2017, we expect the year 2035 will mark a major demographic shift with the share of 60+ renter households reaching somewhere around 31% and becoming the second highest share among all age groups. Despite being the majority, those aged between 35 and 59 will likely see a decrease in their share of renter households, dropping from 44% in 2017 to an estimated 43% in 2035. However, the most notable decline is projected to take place among those aged 34 and under, with their to decrease from 34% to 27% by 2035. 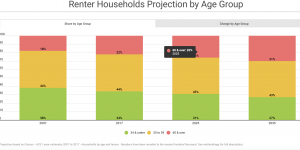 In terms of net numbers, the 60+ cohort is expected to grow to an estimated 18.6M by 2035 and will become the second largest group of renter households, surpassing those aged 34 and under.

This growing share of older Americans is bound to have an impact on the U.S. real estate market. This is a cohort of people that witnessed firsthand the impact of the 2007 housing crisis and the re-shaping of the economy, forcing most of them to give up their homeowner status and move into rental apartments. It’s important for developers to acknowledge the particular housing needs of older renters and make sure that they are being met.

Use the interactive table below to find out more about renter age groups in your city. Noteworthy of a mention is the fact that of the over 300 cities analyzed, 24 cities have larger numbers of senior renters over 60 years of age than young renters under 35 years of age (highlighted in green).

Fair use and redistribution

We encourage you and freely grant you permission to reuse, host, or repost the images in this article. When doing so, we only ask that you kindly attribute the authors by linking to RENTCafe.com or this page, so that your readers can learn more about this project, the research behind it and its methodology. For more in-depth, customized data, please contact us at media@rentcafe.com.

Households, Housing, Rent, RentCafe, Renting
previous postBudget-Friendly Road Trips next postWhat to Do When Your Aging Loved One Is An Unsafe Driver