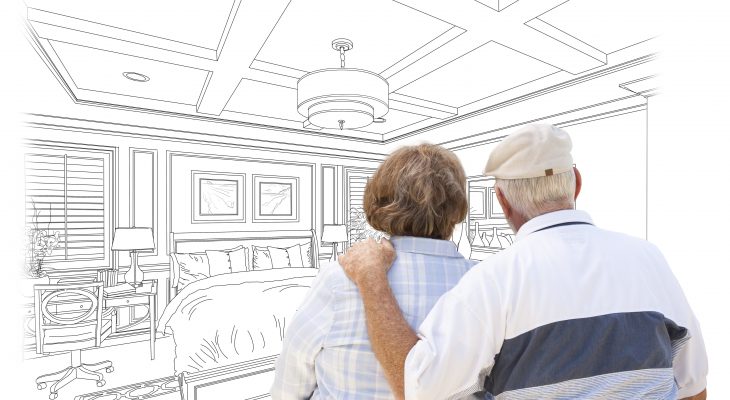 The U.S. is getting older, and according to the U.S. Department of Health Administration on Aging, the number of Americans ages 65 and older will more than double to 88.5 million by 2050. Of course, along with an aging population come the questions of how to care for them and where they’re going to live. Growing Senior Population Offers Builders and Remodelers New Opportunity
Although the group often has several options for where to live when they start experiencing mobility issues — including active adult communities, nursing homes and assisted living facilities — a significant portion of seniors want to stay in their current homes as they age.
“Of people 55 and older, the reality is 90% of them want to stay where they are,” Construction Manager Mike Shina, of Atlanta homebuilder and developer Windsong Properties, told Construction Dive.

Of people 55 and older, the reality is 90% of them want to stay where they are.
Despite the fact that many seniors want to remain in their current homes, part of the demographic is able to downsize and look for a new home designed specifically for them. Shina said a significant portion of Windsong’s customers are empty nesters downsizing from local homes or moving to the Atlanta area to be closer to their children.
He said that although the location of a community, or, as he put it, “proximity to healthcare and grandchildren,” is paramount for these customers, when it comes to choosing a home in which to age comfortably, it’s all about flexibility of design. Shina said Windsong’s open plan homes have standard features like wider doorways, stepless entries, 32-inch clear minimum openings and lower shower thresholds, but many are constructed without interior bearing points to make future renovations easier.
“We like to think that we’ve designed into the home what they would need to stay independent, and that’s why we really call it active adult housing,” he said.
Shina said the company’s home designs have even taken into consideration the needs of “the sandwich generation,” and many of their floor plans have separate suite areas if an adult child or older parents move in. In addition, Shina noted, most of their homes with a third bedroom end up with that space turned into a study or home office.

Not everyone, though, is able or wants to move into a new home in preparation for the golden years. For those people, creativity is the key to making a home as safe and livable for as long as possible.
According to Harvard’s Joint Center for Housing Studies, 5.5 million older households include someone with mobility difficulty but are without accessibility modifications, such as no-step entryways and ramps. Researchers have concluded that there is at least a $13 billion opportunity for the remodeling industry just by installing these features.
Architect Kimberly Bunn, of Bunn Architecture, said existing aging-in-place home renovations are a special challenge because the homeowner is often dealing with limited space at a time when more space is needed to deal with mobility issues.
“It’s easier to plan for (aging in place) with new homes and even renovations if you’re adding on,” she told Construction Dive. “But I go into a lot of projects where they’re in the home they’ve been in for 15 to 20 years. They’ve raised their kids there, and they don’t want to leave, so a lot of times it takes a little bit more (creativity) because you’re working with existing space.”
Bunn said the lack of space necessitates, for example, things like finding a way to create a bathroom out of existing closet space on the first floor if the bathrooms are currently on the second floor. Stairs, indoor or outdoor, are another challenge, she said, as balance, or lack thereof, becomes an important consideration.
“If everything is on the second level, can we get a person who’s aging up the stairs easily? It might be a matter of making the stairs more graceful with landings so that they can stop more frequently,” she said. “If your house is raised off of the ground, are there steps that come up? How do we get that person up the steps, whether it’s a ramp or shorter runs of steps with landings and good handrails for them to hold onto?”
Bunn said that during the renovation process, factoring in flexibility for the future is critical because not every special accommodation needs to be made right away.
“You don’t want to put a grab bar in the bathroom when you’re 40,” she said, “but we put in the future capacity to add grab bars.”
Bunn added that postponing some changes is sometimes a matter of morale.
“I’ve had clients who are not wheelchair-bound yet, but they have a debilitating disease so they know in five to eight years the likelihood is that they’re going to be, but they don’t necessarily want to have those (home modifications) there as a constant reminder,” she said. “So we’re sensitive in the design so that we can do things that can be modified and easily changed to give them a better quality of life all the way up to that point.”

Small changes with a big impact

Not all aging in place accommodations need an architect or contractor, though. Jeff Salter, CEO of Caring Senior Service, said in-home safety and fall risk assessments often result in small, superficial changes that make a huge impact on the daily life of someone with limited mobility.

I think the mindset, regardless of age, is on efficiency, but also quality with artistic elements.

“(The assessment) takes into account their current ability to sit and walk and also their balance,” Salter told Construction Dive. “That assessment really guides us to what steps we have to take next — what things they’re going to need.”
Salter said the typical modifications his company performs are centered around the senior’s day-to-day activities and include changes like grab bars in the bathroom and kitchen or rails in long hallways. Salter said that as people age, reflexes slow down, so recovery from a slip is increasingly challenging.
Shina said the option for fixtures like grab bars are much more plentiful than they were just 10 to 15 years ago.
“Trying to find a grab bar that matched the plumbing fixtures was ridiculous. Nobody did it. Now you can get a toilet paper holder that you can use to lift yourself up on,” he said.
In bathrooms — a common area of slip-and-fall accidents — Salter said maneuvering in and out of the shower can be risky for many of his clients, and tile is the worst flooring option for someone who is at risk for falling.
“While the tile looks beautiful, and it fits with modern design, it may not be the right design for someone that’s at an advanced age,” he said.
Lighting is another small change that can make a big impact, according to Salter.
“That’s an easy modification if you use a light meter to determine what the total amount of light is. Sometimes it’s as simple as changing a bulb,” he said. “Sometimes we’ll need more bulbs or maybe an additional fixture or even have to paint a wall. If you change the color on a dark wall, that really provides a lot more reflectivity and somebody would be able to see better in those areas.”

A broader trend not limited to boomers

While the aging in place movement meets an important need, Shina sees it as part of a larger trend toward the use of universal design, not only for baby boomers but for millennials as well.
“The old way that we did things seems to be wasteful, and I think the mindset, regardless of age, is on efficiency, but also quality with artistic elements,” Shina said.
He added that as Windsong joins the trend of urban redevelopment, their homes will evolve into more of a universal design as opposed to strictly active adults.
“If you want to save resources and talk green building, an aging-in-place-designed house is about as good as you can get,” Shina said, “because if that’s the house they buy, that’s the house that serves them for their entire lives.”