Rosacea Is More Severe In Those Over 50 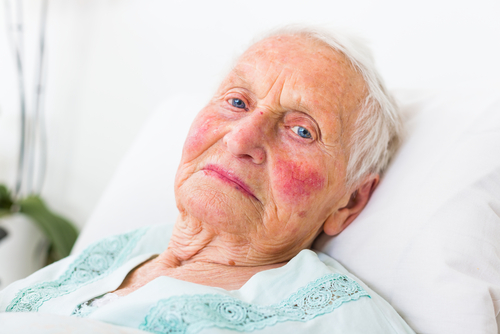 Rosacea is a common skin condition that causes redness, visible blood vessels, and acne-like bumps. The skin may become itchy and tender and it can also affect the eyes. Rosacea is often believed to be prevalent in adults from the age of 30 to 50, but a survey by the National Rosacea Society found that 43% of people first noticed their symptoms after the age of 50. In many cases, symptoms are more severe in older people as rosacea is a progressive condition and seniors are more likely to delay treatment.

The causes and triggers to rosacea

It’s unclear what causes rosacea, but a link to environmental factors and genetics has been found. Anything that increases blood flow to the skin, particularly the face, can aggravate symptoms, so avoiding these can reduce symptoms. It’s recommended that people with rosacea avoid spicy foods, direct sunlight, alcohol, hot drinks, intense exercise, stress, and extreme temperatures as this helps to reduce the chance of skin flushing that can make symptoms worse. Rosacea can occur in anyone but it’s more likely to affect middle-aged women who have fair skin, smoke, and have a family history of the condition.

Rosacea affects the skin and eyes

Rosacea is a common skin condition that affects mostly the face. Symptoms include redness on the cheeks and nose, visible blood vessels from them swelling up, and pus-filled bumps that resemble acne. Around half of people with the disease will also develop an eye condition known as ocular rosacea, which is eye dryness, and irritated, swollen eyelids, often caused by cysts. It’s not uncommon for eye problems to be worse than skin problems for some people. More rarely, rosacea can lead to the skin thickening on the nose causing it to enlarge and appear bulbous. This is more often seen in men than in women. Symptoms can flare up for weeks or months and then calm down for a while before it’s triggered again.

No cure, but treatment options are available

There is no known cure for rosacea but symptoms can be controlled and reduced with treatment. Laser therapies are effective at destroying the tiny blood cells under the skin that cause redness, while antibiotics can be used to manage skin inflammation and the pus-filled bumps. Avoiding potential triggers that can cause the skin to flush can reduce symptoms and using camouflage makeup can help to cover redness, however, some cosmetics can exacerbate symptoms, so it’s recommended that you speak to a dermatologist about which products are best to use.

If you start to notice any symptoms that could be rosacea you should see a dermatologist or your doctor as soon as possible. Symptoms can be similar to other skin conditions, some of which can be more serious and require prompt treatment. Treating rosacea early on can help to prevent the symptoms from getting worse and will help you to identify and avoid any potential triggers.